A few years ago, Mercedes Carnethon, a diabetes researcher at the Feinberg School of Medicine at Northwestern University, found herself pondering a conundrum. Obesity is the primary risk factor for Type 2 diabetes, yet sizable numbers of normal-weight people also develop the disease. Why? 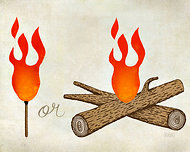 In research conducted to answer that question, Dr. Carnethon discovered something even more puzzling: Diabetes patients of normal weight are twice as likely to die as those who are overweight or obese. That finding makes diabetes the latest example of a medical phenomenon that mystifies scientists. They call it the obesity paradox.

In study after study, overweight and moderately obese patients with certain chronic diseases often live longer and fare better than normal-weight patients with the same ailments. The accumulation of evidence is inspiring some experts to re-examine long-held assumptions about the association between body fat and disease.

Dr. Carl Lavie, medical director of cardiac rehabilitation and prevention at the John Ochsner Heart and Vascular Institute in New Orleans, was one of the first researchers to document the obesity paradox, among patients with heart failurein 2002. He spent more than a year trying to get a journal to publish his findings.

“People thought there was something wrong with the data,” he recalled. “They said, ‘If obesity is bad for heart disease, how could this possibly be true?’ ”

But there were hints everywhere. One study found that heavier dialysis patients had a lower chance of dying than those whose were of normal weight or underweight. Overweight patients with coronary disease fared better than those who were thinner in another study; mild to severe obesity posed no additional mortality risks.

In 2007, a study of 11,000 Canadians over more than a decade found that those who were overweight had the lowest chance of dying from any cause.

Experts are searching for explanations. One idea is that once a chronic disease develops, the body becomes catabolic, meaning it needs higher energy and caloric reserves than usual. If patients do not have those reserves, they may become malnourished even though their weight is normal, said Dr. Gregg Fonarow, one of the directors of the preventive cardiology program at the University of California, Los Angeles.

Some researchers suspect genetics: Maybe thin people who develop diabetes, cardiovascular disease and other chronic ailments have gene variants that make them more susceptible to these illnesses and put them at greater risk once they become ill. Heart disease in thin people may represent a different illness from heart disease in heavier people, Dr. Lavie said.

It may be that doctors do not treat thin patients as aggressively as they do heavier patients — or that the yardstick itself is to blame. Most researchers assess obesity by measuring body mass index, a simple ratio of height and weight. But B.M.I. does not take into account body fat, lean muscle mass, metabolic abnormalities and other nuances of physical composition.

Perhaps, some experts say, we are not asking the right question in the first place. Maybe we are so used to framing health issues in terms of obesity that we are overlooking other potential causes of disease.

Dr. Neil Ruderman, an endocrinologist at Boston University School of Medicine, was the first to identify a condition he called “metabolically obese normal weight,” in 1981. Such people have weights in the normal range on the B.M.I. chart but also have metabolic abnormalities, including high levels of insulin resistance and triglycerides; they tend to carry fat around the middle, which is more apt to affect the heart, liver and other organs than fat in the hips and thighs.

“If we’re open-minded when we look at the data, we often find confounding factors that can explain the disease associations we blame on weight,” said Linda Bacon, a nutrition professor at City College of San Francisco and author of “Health at Every Size: The Surprising Truth About Your Weight.”

Fitness is an important, and often unmeasured, confounder, and the growing pile of paradoxical evidence is forcing experts to re-evaluate its importance.

The link between obesity and health derives in part from research like the Framingham Heart Study, which has followed thousands of men and women since the 1940s. But Paul McAuley, a professor of health education at Winston-Salem State University, has noted that Framingham and other longitudinal studies often fail to take into account physical activity and fitness.

Research that does tease apart weight and fitness — like a series of studies conducted by Steven Blair at the Cooper Institute in Dallas — shows that being fat and fit is better, healthwise, than being thin and unfit. Regular aerobic exercise may not lead to weight loss, but it does reduce fat in the liver, where it may do the most metabolic damage, according to a recent study at the University of Sydney.

“More often than not, cardiovascular fitness is a far more important predictor of mortality risk than just knowing what you weigh,” said Glenn Gaesser, author of “Big Fat Lies” and director of the Healthy Lifestyles Research Center at Arizona State University.

In 2005, an epidemiologist, Katherine Flegal, analyzed data from the National Health and Nutrition Examination Survey and found that the biggest risks of death were associated with being at either end of the spectrum — underweight or severely obese. The lowest mortality risks were among those in the overweight category (B.M.I.s of 25 to 30), while moderate obesity (30 to 35) offered no more risk than being in the normal-weight category.

Whatever the explanation for the obesity paradox turns out to be, most experts agree that the data cast an uncertain light on the role of body fat. “Maintaining fitness is good and maintaining low weight is good,” Dr. Lavie said. “But if you had to go off one, it looks like it’s more important to maintain your fitness than your leanness. Fitness looks a little bit more protective.”

That is a message that may take a long time to reach your family physician, however. “Paradigm shifts take time,” Ms. Bacon said. “They also take courage. Not many people are willing to challenge the weight conventions. They’re just too culturally embedded, and the risk of going against convention is too high.”