As a 300-pound teenager, Joslyn Smith was told over and over that she needed to lose weight. So she did. 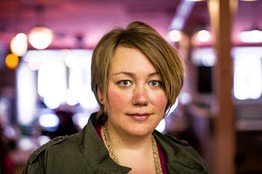 Joslyn Smith is a board member at Ophelia’s Place, a nonprofit in Liverpool, N.Y., that provides education on eating disorders. Jason Greene for The Wall Street Journal

Through a rigorous regimen of eating very little, vomiting routinely and taking dozens of laxatives a day, in addition to exercising for hours, Ms. Smith eventually lost more than 100 pounds, one-third of her peak weight. Her body became so starved that it started eating her heart muscle, doctors told her, leading to an irregular heartbeat.

Ms. Smith represents what researchers say is a disturbing trend of young people considered overweight or obese who try to diet down to a healthy weight, but along the way develop a severe eating disorder such as bulimia or anorexia.

“I learned that anything goes in order to lose weight” for long-term health, says Ms. Smith, 35, a former Washington lobbyist who now lives in Ithaca, N.Y. and works with eating-disorder advocacy groups. 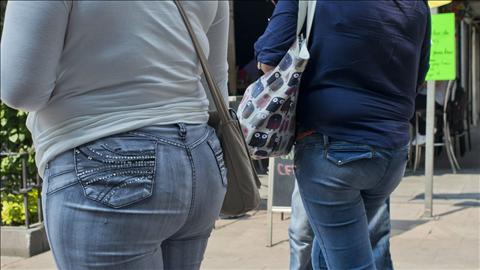 Is the war on obesity triggering eating disorders in children? Health officials are looking hard at the darker side of adolescent weight loss. Shirley Wang joins Lunch Break with details. Photo: Getty Images.

Kids and adolescents appear to be hearing the public-health warnings about obesity. Childhood obesity data released in August by the Centers for Disease Control and Prevention show that for the first time, rates are actually decreasing for low-income preschool-age children. The newest CDC data suggest that the number of U.S. adults who are obese—about one-third of the population—seems to have plateaued.

But for a subset of people like Ms. Smith, dieting can spiral out of control and lead to a severe eating disorder. Even when dieters don’t plummet to an emaciated body weight, their problems can include potentially serious consequences like heart-rate abnormalities, fainting, heart attack and even death. They also experience significant fears about being fat or regaining weight, social withdrawal and plummeting grades in school.

The risk that anti-obesity messages may unintentionally push kids and teens to develop eating disorders is one that experts have debated for years.

When schools in several states began to issue so-called body-mass index report cards to tell parents whether their children were overweight, some eating-disorder clinicians and parents fretted about the practice. They feared it could increase the likelihood heavy children would feel pressure to diet by any means necessary.

Last week, Massachusetts officials ended the practice because of concerns about possible negative reactions to the information.

New evidence suggests those worries have become a reality in more than a few children and teens. Though large studies documenting the number of overweight kids who develop eating disorders don’t exist, one recently published study of patients treated for eating disorders at a Barcelona hospital in 2010 found that nearly 38% were previously overweight, up from 13% in 2001.

And at Royal Children’s Hospital in Melbourne, Australia, 47% of the patients who were admitted to the eating-disorders clinic in 2009 with severe, anorexia-like symptoms were previously overweight, up from just 8% in 2005, says Melissa Whitelaw, a clinical specialist dietitian at the hospital’s eating-disorder unit. She presented these data at the International Congress of Pediatrics held in Melbourne in August. (Typically people with anorexia are severely underweight but can be admitted at higher weights if their symptoms are severe enough.)

“Many of those adolescents, when I first met them, they’ll talk about how they were talking about obesity in school,” Ms. Whitelaw says.

Anti-obesity proponents say spreading the message that obesity is unhealthy trumps any negative consequences it causes in a few children. More than 60% of Americans are considered obese or overweight.

Though the dangers of eating disorders have been overshadowed by concerns over obesity in recent years, extremes at both ends of the weight spectrum can wreak havoc on the body and the health-care system, some experts say.

Rates of diagnosed eating disorders are low—affecting around 3% of the U.S. population. But studies show that the rates of some types, like bulimia, are growing substantially. Rates of severe calorie restriction, purging and bingeing, all features of eating disorders, doubled between 1995 and 2005, according to another study.

Some clinics in the U.S. also have noticed an uptick, according to specialists who run those centers. Having a “normal weight doesn’t mean that they’re healthy,” says Rollyn Ornstein, an adolescent medicine doctor at Penn State’s Hershey Medical Center who has treated many of these cases. “The myth is that all that matters is the number on the scale. These kids are struggling.”

Parents also may fail to recognize that their child’s weight loss is unhealthy. Dr. Ornstein recalls one overweight patient who was eating just a few lettuce leaves a day but whose parents were proud of her for her weight loss because they thought she looked better.

Scott Crow, a psychiatry professor at the University of Minnesota who specializes in eating disorders, and his colleagues analyzed data looking at the new eating-disorder criteria in the now-released update of the American Psychiatric Association’s diagnostic manual. They realized people who didn’t fit the typical picture of anorexia, including those who weren’t very low weight, actually made up the largest portion of the cases.

Daniel Le Grange, a psychiatry professor who directs the eating-disorders clinic at the University of Chicago, says that therapists may also be confused by such cases because usually the goal with treating anorexia is weight gain. At his clinic, about 1 in 10 kids has had a history of being overweight, he says.

There are also special challenges for kids with eating disorders who are average-size or overweight. In the U.S., many hospitals and insurers have a weight criterion for admission, so heavier patients may have difficulty getting coverage. In addition, eating-disorder facilities may be unprepared or unwilling to accept larger patients for fear they might trigger problems in other patients with anorexia, who fear being fat.

Ms. Smith, for instance, said she had to go to four treatment centers before she found one that would accept someone her size and would be covered by her insurance. She says she’s healthy and experiences fewer struggles with her body image, but still checks in weekly with a dietitian and a therapist.

These patients demonstrate that public-health messages about obesity should point more toward the need to improve lifestyle behaviors, which kids can control and are more important toward maintaining health in the long run, some experts say.

Ms. Smith agrees and says this sort of message would have been helpful to her.

“We need to focus on health and behavior outcomes rather than weight outcomes,” she says.

Write to Shirley S. Wang at Shirley.Wang@wsj.comDoctors warn against the dangers of children losing weight too quickly